Home of the Vote

The fight for democracy and the last British rising 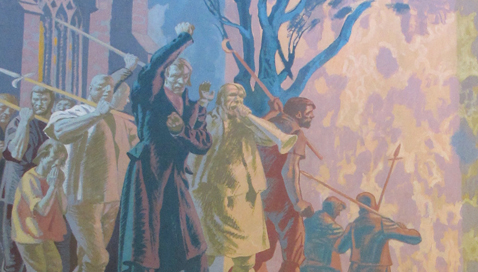 We are proud of Newport’s special place in the democracy which we all now take for granted. Following the French Revolution and America’s Declaration of Independence, people power in Britain was on the rise when, in 1839, Newport became the flashpoint for a very British revolution – the fight for the vote. 5000 working people converged on the city from across Monmouthshire. They were supporting the People’s Charter which called for voting in elections to be extended to all (sorry, men only…) whatever their income or status together with 5 other democratic changes. The last leg of the march was from St Woolos Cathedral, down Stow Hill to Westgate Square – where you will find a powerful sculpture to mark the spot.

The political stakes were high as the powers that be met the threat from John Frost and the other Chartists with a fusillade of gunfire from soldiers posted in the Westgate Hotel. Over 20 marchers were killed and their bodies were hastily buried in an unmarked grave at St Woolos Cathedral – to this day fresh flowers are laid in the graveyard anonymously in their memory. Over the decades all but one of the Chartist demands have been granted(annual elections), and John Frost himself eventually returned to Newport a hero after being transported to Tasmania, then receiving a pardon. The Chartists’ example has inspired generations of independently-minded politicians and local performers – the Manic Street Preachers and Michael Sheen for example, as well as celebratory Chartist events.