A flashpoint in the fight for votes 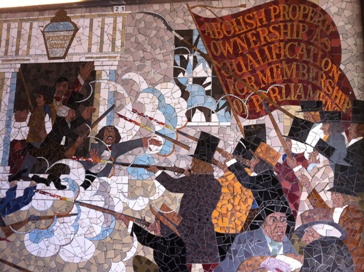 These statues celebrate the Chartist uprising that shook Newport.

On 4th November 1839, thousands of Chartist protestors marched along this street, demanding voting rights for all adult men.  They hoped to take the bridge and hijack the mail coach to let the country know of the Chartist cause.

A detachment of soldiers was waiting for them in the Westgate Hotel, along with the Mayor watching from a window.  When the advancing Chartists took shots at the Mayor the soldiers opened fire, leaving about 20 protestors dead and 50 wounded.  Hundreds more were arrested.